Turmeric is a flowering plant, derivative from the ginger family. The roots are ground up into a bright yellow powder and are commonly used as a spice in cooking, most noticeably in curries.  As well being used as a spice it was also used in ancient medicine as an anti-inflammatory aid due to it’s being a great source of fibre, vitamin B6, vitamin C, zinc and magnesium. It is also full of magnesium, potassium and calcium. 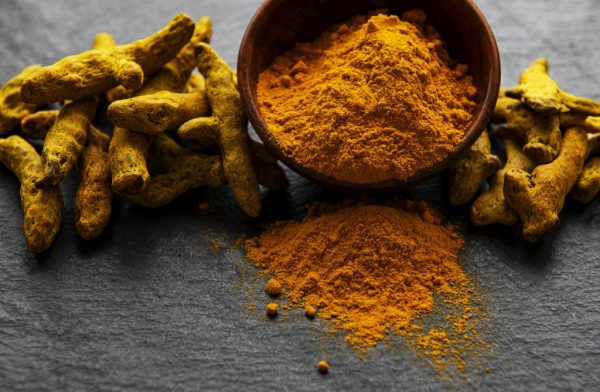 The substance within Turmeric, Curcumin is what gives Turmeric its successful health benefits. Two of its most prominent health benefits are its anti-inflammatory and antioxidant effects.

Inflammation occurs when white blood cells move to the injured area of the body to protect against further damage from foreign objects or substances. This chemical change and rush of blood is why the skin around the injured area will appear red and often feel warm to the touch. Curcumin helps by blocking a molecule called NF-kB from attacking your cells and causing the inflammation. It is believed that curcumin is powerful enough to match some anti-inflammatory drugs without the side effects. Taking turmeric supplements as an anti-inflammatory aid will help reduce low grade chronic inflammation, headaches, period pains, cold and flu and sprains and strains. Taking between 400-600mg up to three times a day should ensure you will start to see an improvement.

Turmeric (curcumin) has strong antioxidant qualities adding it to the high calibre collective of “super foods” we know today. Antioxidants protect the cells from molecules that are produced when the body breaks down food or is exposed to tobacco smoke or radiation, also known as ‘free radicals.’ Taking turmeric supplements will protect cells against damage caused by such free radicals that have been known to play a part in increasing the risk of heart disease and cancer.

A Cancer Research UK article informs us of the results of a Phase I clinical trial on 25 patients with precancerous changes in different organs. The study did indicate that curcumin could stop the precancerous changes from becoming cancer. Research also shows that there are lower rates of cancer in those countries where people consume curcumin throughout the day.

Adding turmeric to every meal may be quite a challenge, especially with the fast-paced lifestyle of today. Turmeric can be consumed in many ways, for more information about how you can add this to your supplement get in touch today.