Sea buckthorn oil includes a variety of vitamin A, B1, B2, C, D, E, K and P, as well as amino acids, folic acid and 20 mineral elements. It may also be the only plant in the world to contain all four omegas: omega 3, omega 6, omega 7 and omega 9. Omega 7 is a specific kind of fatty acid called palmitoleic acid which carries some unique and impressive health benefits. The most important of these benefits include reducing the risk of heart disease.

Sea Buckthorn oil helps to reduce issues with the skin. Due to its unique composition of fatty acids, amino acids, vitamins and minerals, Sea buckthorn berry oil works wonders for improving the healthiness of skin. It can reduce redness, relieve dandruff and moisturise the scalp while improving the strength of skin on a cellular level.

Sea buckthorn berry oil is packed full of nutrients which promote faster cellular regeneration. If it is included within a daily skin routine, it can support elasticity restoration and prevent signs of ageing.

Being a powerful anti-inflammatory, it is a great treatment for people with acne scarring and preventing spots from returning. Sea buckthorn oil is a natural antibacterial, cleansing the pores and leaving the face feeling tight and youthful.

There are many benefits that take place within the digestive system, which are often overlooked. When ingested, it accelerates the healing process of many digestive problems. Omega 7 is found throughout the body, and when ingested it provides the same reasons it is applied topically, by moisturising. This can be helpful for ulcers, which are an eroded area of the skin or mucous membrane. When irritated or inflames, it can lead to conditions such as irritable bowel syndrome, colitis or acid reflux. The omega 7 found within sea buckthorn oil can help to prevent these, as well as rapidly heal damaged membranes. 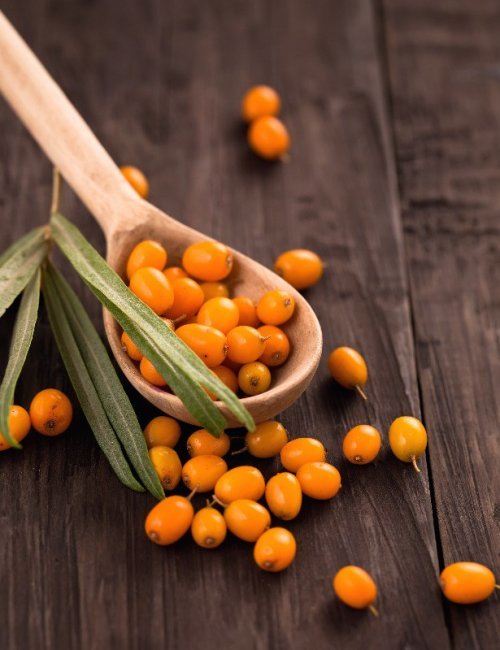 This website uses cookies to improve your experience while you navigate through the website. Out of these, the cookies that are categorized as necessary are stored on your browser as they are essential for the working of basic functionalities of the website. We also use third-party cookies that help us analyze and understand how you use this website. These cookies will be stored in your browser only with your consent. You also have the option to opt-out of these cookies. But opting out of some of these cookies may affect your browsing experience.
Necessary Always Enabled
Necessary cookies are absolutely essential for the website to function properly. This category only includes cookies that ensures basic functionalities and security features of the website. These cookies do not store any personal information.
Non-necessary
Any cookies that may not be particularly necessary for the website to function and is used specifically to collect user personal data via analytics, ads, other embedded contents are termed as non-necessary cookies. It is mandatory to procure user consent prior to running these cookies on your website.
SAVE & ACCEPT
Web Design Kent