The demand for gelatin capsules/HPMC capsules for oral consumption has risen considerably due to its universal use without any fillers. In 2014, around 10%-15% of the USA’s supplements and medications were launched in capsule form, compared to just 5% in 2007.

Over the years gelatin capsules were the preferred choice of capsule shells in the pharmaceutical industry and planned to remain popular, however vegetarian capsules such as Hydroxy Propyl Methyl Cellulose or HPMC capsules have started to infiltrate.

Gelatin is a protein which is an essential component for human consumption and development. It is Generally Recognised as Safe (GRAS) in pharmaceutical and food consumption by most regulators. It is GMO free, completely natural and non-allergic. Gelatin capsules are usually derived from beef or pork along with water and a plasticizing agent such as glycerine to provide durability. Gelatin capsules have an advantage for both the consumer and the manufacturer.

Gelatin capsules are easy to digest and dissolve within minutes of reaching the stomach for digestion. This ensures that the medicine or supplement within it won’t pass through the consumers digestive system without being absorbed.

The use of soft gel gelatin capsules can increase the bioavailability of poorly absorbed or poorly soluble nutrients, according to the Natural Products Insider website. Through stabilizing, solubilizing and other techniques, manufacturers can enhance the effectiveness of the included nutrients such as herbal remedies and supplements such as coenzyme q10. Many of these methods are not possible with solid materials.

Because of the smooth texture, gelatin capsules are much easier to consume for some. They also mask any horrible tastes from the supplements inside. Most people hate the taste of fish oil for example but know the benefits it can provide the body, so a capsule alternative is much more convenient.

As gelatin capsules have robust and approved technology, the manufacturing cost of making gelatin shells is low. In contrast, the investment cost of the HPMC technology is quite high and there are complexities involved. 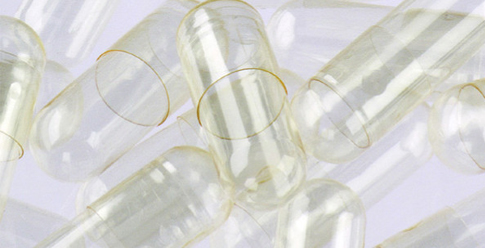 Several materials have been tested as a substitute for gelatin capsules. Hydroxypropylmethylcellulose (HPMC) has become a successful alternative material for two-piece capsules and is used for supplements all over the world.

Hydroxypropyl Methylcellulose is globally known as “Hypromellose” and manufactured by chemically made polymer cellulose. It is considered safe for normal human consumption and is commonly used as an option instead of gelatin because of its vegetarian source and its physical appearance to gelatin.

This plant-derived cellulose has been an option for vegetarian capsules in pharmaceutical applications since 1998. It is a physically stable polymer that’s resistant to stringent heat and humidity conditions, with a low moisture content that makes it suitable for moisture-sensitive ingredients. The role of the HPMC capsule is to protect its contents from degradation or product changes, which means insulating against temperature fluctuations or moisture exposure, the stability of the capsule material is a critical factor in product development.

HPMC is also being adopted as a film coating or a sustained-release tablet material in the pharmaceutical field. HPMC capsules have been developed for both pharmaceutical products and dietary supplements to not only withstand temperature excursions but also to meet dietary requirements.

HPMC capsules incorporate a gelling agent to achieve enteric properties, allowing for the protection of sensitive ingredients from the acidic environment of the stomach and complete dissolution in the intestine. They also provide sufficient taste-masking and acid-resistance to prevent gastric reflux for fish oils and have become the solution of choice for numerous probiotics, herbal or mineral formulations on the market today.

HPMC-based capsules can also play a role in addressing poor bioavailability. These capsules can interact with poorly soluble APIs, leading to a lower crystallisation rate in the GI tract, which can be important in situations when there are supersaturated APIs in the intestine or when dosing either a high-energy salt form or a weakly basic API.

Engaging with website queries, developing new product ranges and brands with her customers, Claire understands your brand and lives it.

As well as this, she provides both the sales team and all Supplement Factory customers with the resources they need to understand how we work, the manufacturing process and aftercare.