The Decades Most Popular Diets from 1900 to now

Each decade has dealt with a variety of circumstances that have shaped the weight loss industry. The constantly shifting cultural, political and scientific climate has shaped and dictated different popular diets from each decade.

Today, we look at the most popular diets throughout the years, and how they shaped the weight loss industry into the booming health sector it is now.

In the early 1900s, Horace Fletcher advised the public that food and drinks should be chewed 100 times per minute before being swallowed to build strength in the jaw, slow down the pace of eating and improve digestion. Hence why Horace Fletcher gained the nickname “The Great Masticator” stating that this method turned “the pitiable glutton into an intelligent epicurean”. At the time, his theories were accepted by elites of the 1900’s such as Mark Twain and John D. Rockefeller.

In the 1910s, a physician based in Los Angeles, Lulu Peters, introduced a weight loss revolution with her best-selling book “Diet and Health with Key to the Calories.” As this point, the concept of a calorie was so new that the book even included a guide on how to pronounce it. Lulu Peters presented calorie intake as a balance of energy and discussed foods as the calories they possessed for examples a slice of bread was now 100 calories of bread. 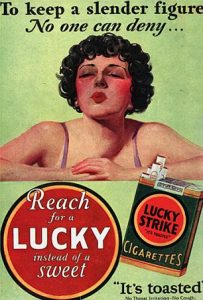 The 1920s were the decade of everything in excess, and the invincible mentality was represented by the diet advice of the decade – smoking. In 1925, the brand Lucky Strike capitalised on its consumers by advertising cigarettes as an appetite suppressant! Tobacco’s appetite suppressing qualities were introduced as the “cigarette diet” with the tagline “Reach for a Lucky instead of a sweet”.

Due to global economic collapse, the diet advice of the 1930s was equally as depressing. It was believed that eating a grapefruit before every main meal stimulated metabolism and weight loss and that bananas and skimmed milk were a great meal replacement. This advice was released by the United Fruit Company, who at the time was the worlds largest import of bananas, but still became one of the most popular diets of the decade.

During the first half of the 1940s, the world was trapped in a war that would alter the future for everyone. Food choices weren’t made concerning whether people wanted to lose weight or not, but rather because it was a necessity. The wartime rationing effort limited the number of certain ingredients accessible.

One adult was allowed 4 ounces of ham, 2 ounces of butter, 2 ounces of cheese, 8 ounces of sugar and 3 pints of milk per week. People were encouraged to grow their own fruit and vegetables in gardens and had to go without staple high carbohydrate ingredients such as flour and oatmeal.

In the 1950s, prayer was used to lose weight, as well as relieve the soul of any heavy burden. In 1957, Reverend Charlie Shedd authored the book “Pray Your Weight Away” after he lost 100 pounds. He condemned shapely bodies while shouting about slim physique and how it could be created with a simple prayer. The Christian diet continued to explode, so much so that Shedd wrote a successful sequel “The Fat is in Your Head” in 1972.

Weight Watchers was born in 1961 when Jean Nidetch hosted a meeting with friends to discuss weight loss strategies. Two years later, Nidetch was 72 pounds lighter and ready to begin a dieting empire that would change the way the world perceived weight loss. Still today, many people follow the rules of Weight Watchers and attend group meetings to discuss their successes.

The 1970s was the decade of pharmaceuticals. Diet supplements were advertised as a miracle weight loss drug that could suppress appetite and boost metabolism. The primary ingredient within the first diet supplements in the industry was phenylpropanolamine, a type of amphetamine used to treat upper respiratory problems. The National Clearinghouse for Alcohol and Drug Information estimated that 10,000 reports of PPA poisoning were stated per year.

In 2000, the USA Food and Drug Administration issued a public health advisory warned of the effects of PPA and began the process of removing it from products, revealing a more transparent and honest weight loss industry, focussed on the natural side.

The election of Ronald Reagen to the presidency marked the rise of American conservatism and diet advice followed suit. Miracle weight loss solutions fell by the wayside, as a more disciplined approach took over. The Scarsdale Diet consisted of a two-week high protein, low carb and low-calorie diet. Participants would spend two weeks on the diet followed by two weeks off and were instructed to consume fewer than 1000 calories per day.

Created by DR Robert Akins in 1972 hit its peak in the 1990s and early 2000s. The goal of a severely low carb diet is to move the body into a state of ketosis, a process that forces the body to convert stored fat into energy rather than stored glucose.

The master cleanse diet, or lemonade diet was a huge hit in the 2000s due to Beyoncé’s use of the diet for her weight loss for the film Dreamgirls. The master cleanse diet is a liquid only diet consisting of three things; lemonade, salt water and a herbal laxative tea. The claims were simple, drink just these for 10 days to lose weight, feel energetic and stop cravings for unhealthy food. There was never any proof that the detoxification lead to long term weight loss, but it was a huge craze in the 2000s.

In the 2010s, the female weight loss industry flipped on its head. Women began to want to be strong and defined, rather than skinny. Curves became the desired body type, with new celebrities promoting larger bums and thighs. This produced a wave of women going to the gym, weight training and learning about healthy diets and workouts, which is how the weight loss industry followed. Top brands now focus on supplementing a healthy diet, ensuring the body is in the best condition both inside and out. Most weight loss brands also follow suit on weight loss programmes, sheets and “how to” videos online to follow their consumers’ journey and be the company to stick with from start to finish.

Now, rather than following trends, personalised nutrition rather than following popular diets are more effective, with consumers choosing the supplements they know they need rather than celebrity endorsed. With a huge range of products out there, the unique stand out brands are now winning business and more startup companies are succeeding quicker than expected.

Brands now focus on the life cycle of each stage within a weight loss journey, from the initial meal replacement shakes and fat burners to boost motivation, curb cravings and reduce food intake, to sports nutrition products for when the consumer no longer wants to lose weight but tone up and build muscle, to immunity boosting products for training in the winter.