The History of Vitamins

Between 2000 and 2017, retail sales of nutritional vitamins have more than doubled from $17 billion to over $36 billion. 52% of Americans state now that they take a form of dietary supplement, with over 65% of the UK public saying the same thing.

When the 20th century began, only three essential nutrients were recognised within food; protein, carbohydrates and fat. Poor hygiene meant diseases were thriving and people sanitized food to remove bacteria before consuming it. Rice was polished along with grains, meaning the vital B vitamins were destroyed and vitamin B deficiency set in, with sores and damaged nerves becoming a problem. Sterilising milk destroyed vitamin c content, so scurvy became a common problem as well and this was just the start.

In 1912, scientists began trying to resolve the issues and discovered that food contained more than three nutrients. Originally, these were called “accessory substances” which later changed to the term “vitamine” on scientific papers, which then again changed to the word we all know today, the vitamin. Casimir Funk, credited for discovering vitamins, proposed the idea that various diseases could be cured if these nutrients were present in foods.

This initial vitamin discovery spawned various products to enter the market. Names such as Vitamine, Double Strength Yeast and Super Vitamins arrived on shelves and generally contained vitamin B from yeast and included various other ingredients. Mastin’s Yeast Vitamon Tablets, created in 1916, were a leading product of the day and likely most like today’s multi, with vitamins A, B, and C, iron, calcium, and Nux vomica, a homoeopathic remedy for heartburn. Its label claimed: “This preparation contains vitamines together with other ingredients which should prove of value in helping to improve the appetite, aid digestion, correct constipation, clear the skin, increase energy, and, as a tonic, to assist in putting on weight in weakened, run down conditions due to malnutrition.”

In the 1920s, vitamin A and C sales surged as the public began to believe that if a supplement contained vitamins, it contained other miraculous chemical compounds as well. This let to vitamin B2 surging in the 1930s. In 1922, multivitamin-type products were advertised for relief from pimples, blackheads, boils, constipation, malnutrition, nervous deficiency, physical breakdown, brain fog, general debility, run-down conditions, to “loosen up the slime and accumulated bile and clean the system,” to improve energy and digestion, and help weak, malnourished people gain weight. 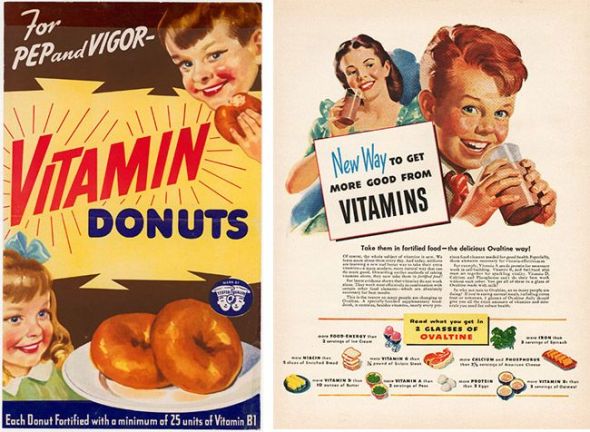 As American men were called to serve during World War 2, a third were found to suffer from disabilities known to stem from poor nutrition. In response, President Franklin D. Roosevelt created the National Nutrition Conference for Defense in 1941. From this, the first set of government-sponsored recommended daily allowances for six vitamins and two minerals.

The first one-a-day multivitamin appeared in 1943. By the 1950s, many multivitamins were sold and promoted in stores to be kept on the dining table for meal times.

In 1973, a company called MegaFood started making vitamins from real food and others began using plant-based ingredients rather than synthetic ingredients and artificial additives.

More nutrients and super-foods have been discovered over time and added into multivitamin blends. As these vitamins have evolved, regulations began to take hold and ensure all products suit the public.

Today, choices such as gluten free, dairy free, soy free, vegan, organic are all options to suit everyone. Many products include varieties for different stages of life from childhood right through to the elderly and many target specific concerns such as heart health.

A timeline of essential vitamins